This newborn has no concept of history, but the pieces of history are embedded in every image his mind presents to him. He does not recognize what unravels before his eyes, whether opened or closed. Nothing has a name or a purpose.

Images from well-worn ancestral paths merge with what he perceives. There are no barriers between the world of ancestral dreams and what his forebears consider to be concrete, actual, and of the present.

The adult, who is assimilated to the surface reality we call “the world” trusts in her knowledge that what rests before her eyes are white impatiens, fully bloomed in a terra cotta flower pot. Beneath this object are the planks of a wooden deck painted a deep red. Several feet beyond, there lies a patch of lawn being doused by a sprinkler at intervals.

To the far right, a group of shade trees where the buzz of a cicada is traced rustles faintly. She knows that the sprinkler was bought at a nearby gardening supply outlet and that the cicada is an insect which sometimes does damage to certain kinds of foliage when depositing its larvae. Moreover, she is probably aware that, under rare circumstances, a cicada might accidentally sting a person, mistaking their arm for a sap-filled tree limb if allowed to rest on it for an extended amount of time.

Her eyes and mind identify these illusions from a life lived far away from the primordial storm that birthed her.

The newborn, without the ability to express such a concept, might fully understand that none of what he sees is real beyond his own perception. The universe at its most basic blackness is harnessed within his brain, and he is aware that before this darkness, and before his eyes looking inward, anything can happen.

The newborn hears the cicada’s drone and is transported through the current that made him along with the insect. They are one and the same, albeit of different physical manifestations. In a dream, the infant grows a long proboscis under the shell of his skull and injects it into various limbs for feeding. The sap, the blood of the universal body fills his veins. When he awakens, he wails into the ever-widening basin of the world before him, where everything is plumed in darkness.

The adult motions into the adjoining room to console this newborn where he lies. To her, it is a small nursery room and he lies safely nestled in a crib.

It is four AM.


Posted by John Di Lorenzo at 6:53 PM No comments:

The future occurs every second, every millisecond, and the road narrows to the head of a pin as it expands outward. I once had a vision of a circle, but that was inaccurate. Now, it is only a line.
The year is 1997.
There is a road that meanders up a hill in lower Westchester County, NY, hidden by a wall of trees. Nothing extraordinary.
At night, this road is pitch dark, save for a lone streetlight located where the road turns at a ninety-degree angle. From afar, the light in the corner resembles a lamp illuminating the corner of a room. The line begins there, veering to the right.
I am more alone here than I have ever been, and the feeling is markedly positive. I’ve cast off the normal trappings of the nineteen-year old college sophomore, the libidinous frustration, the late night parties, the part-time dead end jobs, the uneasiness of the transitory state of being between adolescence and adulthood. All of this, shed like a snake’s skin. Here, I am ageless and inevitably saved. No one is aware of me here in the dark, sauntering down this road. I sense that I am folding into a void of time as I walk to the corner where the light shines down, and then turn the right hand corner into more darkness.
Further down, another lit landmark appears in the form of the US flag. A quarter of a mile beyond it, the road continues toward an intersection where the local library is flanked by the local post office. Beyond this point is another stretch of road leading toward Route 684.
Somewhere within the boundaries between these passages, the mood shifts. I feel as if I am chasing my own shadow cast by random streetlights, which are scarce. More accurately, I appear to be running from phantoms of people and places I had once known. I see myself committing this act, and it seems cowardly. It seems as if am trying to escape the world in vain. It’s a foolish act. There is no escape. Better to confront the world. Better to turn back.
Back within the boundaries of the campus, a police car pulls up alongside me with flashing lights. I stop in my tracks. Worst-case scenario would be a case of mistaken identity. Instead, the cop simply asks me why I am walking around campus so late. I tell him I was just taking a walk. I decide to be truthful about it, adding that I am an art student who gathers inspiration from late night walks. “Late night? It’s four am in the morning bro! Are you nuts?” is his swift response. Next, “Let’s see your ID”. I show him my student ID and my driver’s license.
He proceeds to check my license to see if I have any prior offenses attached to my name. When nothing comes up, save for a speeding ticket that had already been paid, I figure I am clear. Besides, I was walking. At the end of it, he gives me a brief look of suspicion while confiding to a fellow officer over his CB the contents of our meeting. “Alright, go home. Try to find some other way to get ‘inspired’, you know? It’s too late to be walking around”.
In total compliance, I walk back to my apartment (the cop car casually and slowly follows me from a considerable distance). My overriding thought at this moment is that I don’t fully belong to the contemporary world of curfews, property lines and surveillance, but that I must be better prepared to deal with such realities, regardless of my impulse to venture out freely. The prospect of such a life ever increasing with time fills me with an specific kind of sadness; the sort of sadness one feels when moving out of a place they’ve lived in all their life. Few hiding places remain.
Frontiers exist on a tight budget. There aren’t many left here. The mind is quickly becoming the only frontier left, but what good is a mind when it has so little to explore that is new? The woods are government property, as is the field, the riverbed and the cliff side. It’s difficult to know whether or not my own mind contains such boundaries as well.

Posted by John Di Lorenzo at 8:54 PM No comments:

Evening arrives and darkens the scene. The young boy sees a girl, a few years older than him, dangling playfully from the branch of a crab apple tree in the corner of the yard. It is autumn. The above ground pool to the left of her is closed up and winterized. The tool shed to her right is padlocked. In the increasing dark, the girl leaps to the ground and runs across the patio and into her house. The house is a split-level ranch. There is one light on in the dining room where the rest of the family is sitting down to dinner. She joins them. The boy is alone now, listening intently to the wind that rustles through a tall swamp maple slowly shedding its leaves.

The air grows cold. The boy suddenly remembers that he is invisible. No one will notice if he takes a peak through the window into the dining room.

The window is high up from the ground and cannot be reached unless he devises something to lift him up to the windowsill. He finds a nearby toy chest, props it under the window and climbs it, finding the entire dining room scene before his eyes.

No one is there.

The overhead chandelier above the dining room table suddenly turns itself off, shrouding the interior in darkness.

The boy is relegated to imagining the possible scenes within the house while stranded in the yard. None of the family members living there can be seen. Furthermore, they are unaware of him. In fact, no one is aware of him. He turns his attention away from the house, which lies completely blacked-out into a silhouette against the faint, orange light pollution of the evening sky. He now focuses his eyes toward the fence at the back of the yard. In the midst of his focus, he spies a shadow crossing over its aluminum fretwork. Studying it for a while, he seems to recognize the shadow as his own. His initial response is to walk toward it in order to discover its true source (he doesn’t believe that it is him). The scene doesn’t make sense to him. Where is the light coming from that makes this shadow possible?

Approaching the shadow, he is able to confirm that it is certainly his. The paradox: it does not follow his movements. It moves by its own volition toward an expanse of darkness to the left, obliging him to follow it.

Beyond the crab apple tree, the shrubs that strafe the aluminum fence and behind the swimming pool, the shadow is lost before his eyes. This does not disorient him. He can feel its movements now, descending further into the underbrush in the far back corner of the yard. Every sound becomes amplified. A chill runs through his veins and forms a ringing in his temples. Now, in the pitch black before him appears the figure of a great Doberman Pincher, standing completely still and staring him down. The boy is now unable to move.

The Doberman, with a sleek, majestic gait, ambles toward him and resounds an echoing bark that cancels out all other sounds. The yard surrounding their encounter has thoroughly disappeared. All that remains is the dog, with phosphorescent green/yellow eyes, and the sheer black nothingness surrounding his approach.

Posted by John Di Lorenzo at 7:24 AM No comments:

LONG WALKS IN THE DARK: 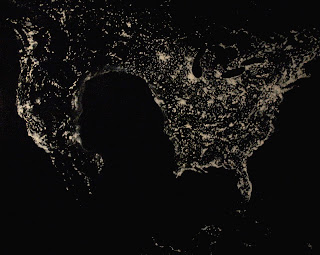 Posted by John Di Lorenzo at 7:02 AM No comments:

Posted by John Di Lorenzo at 12:43 PM No comments: 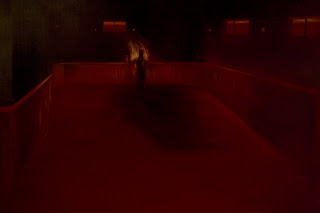 Posted by John Di Lorenzo at 7:55 PM No comments:

John Di Lorenzo
The focus of my work is what I consider to be the mythological aspect of my own memories. I believe that memory is something that cannot be fully trusted. Therefore, my process likens to an adventure through a dark, primordial space where the truth is unfixed. In essence, I paint the "shadows" of a life lived, rather than the recollection of concrete experience. The techniques I employ as a painter stem from a myriad of influences, including painting from the Baroque period, and some examples of postwar twentieth century painting as well. Illustrations from books I read as a child, images from television and examples of vintage rock album cover art also merge into the formal aspects of my work, reflecting some elements of the popular culture I encountered as a child and ways in which these images were processed in my mind. Although I see my work as being open-ended in terms of a message, I consciously work to create images that are embedded with the same sense of power I experience in confronting the sublime, both in memory and present-day life.